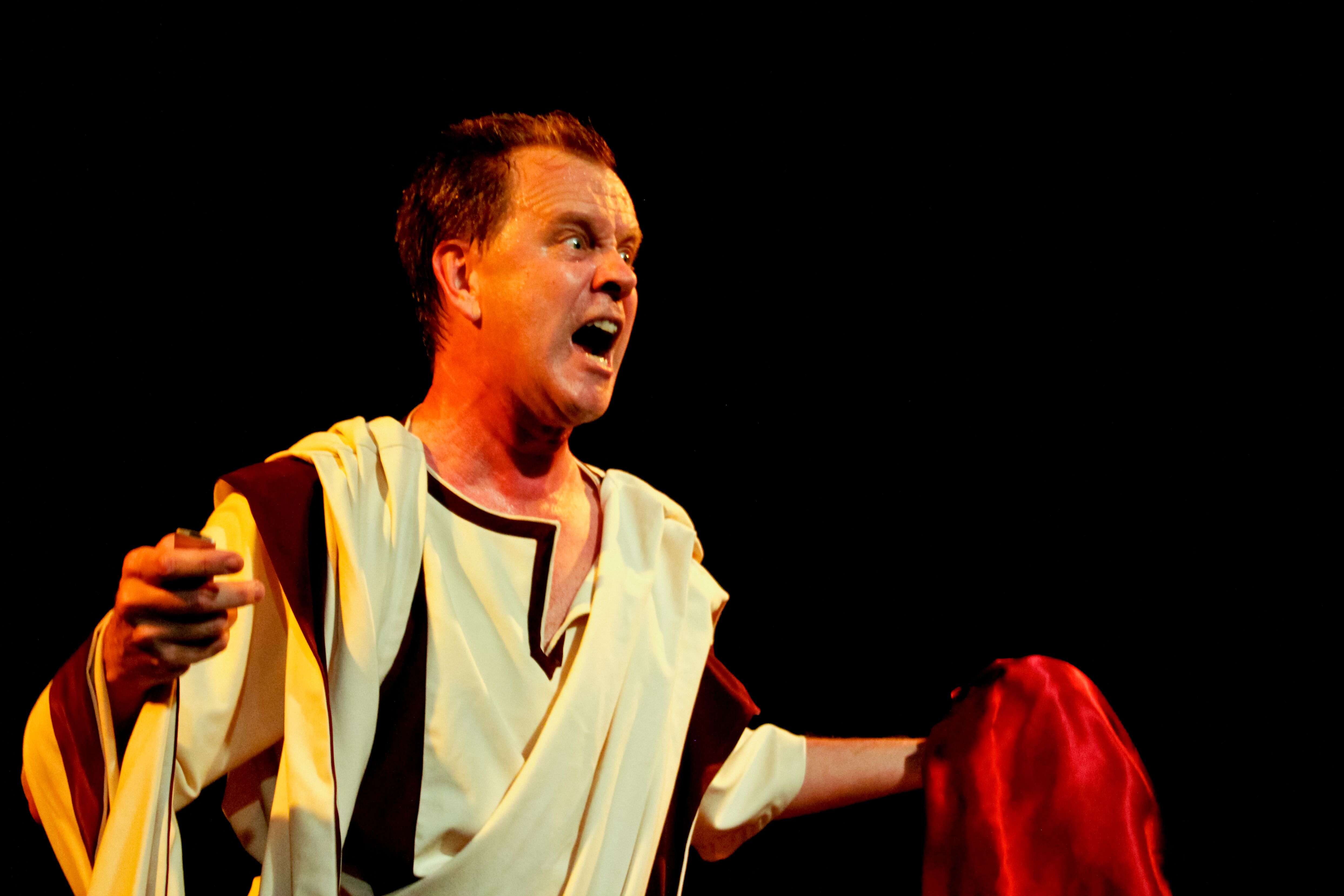 What is Breakneck Julius Caesar?

Breakneck Julius Caesar is an interactive one-man event, with the audience taking on roles of Senators, Conspirators and “The Mob” in the course of the play. It comes to Boston by way of fringe festivals all over North America, winning raves and ovations. The Portland Fringe named it a “Critic’s Choice” and the Orlando Weekly calls it “Electrifying Edutainment” while KC Applauds gave it five stars, declaring it “Well-prepared, focused and magnificent.” Kansas City’s Pitch magazine cheers “The Shakespeare tragedy has never been so much fun and simultaneously instructive. It’s a Fringe go-to.”

Following an intermission on Friday only, Mooney continues to “add by subtraction,” as Shakespeare by Request features an array of thirty-eight monologues, one from each of Shakespeare’s known plays, in response to whichever plays that the audience might want to shout out. In Tim’s interpretations, Shakespeare’s deep profundities ring with poignant irony, wit, sensationalism and a comic playfulness few knew lived in their shadows.

Please note, this add-on is a “pay what you can”. We believe it is worth at least $10, but understand not everyone can afford that while some folks can afford more. When purchasing your tickets, choose your show day and ticket type (adult or student/senior). If you’re coming on Friday, please consider adding Shakespeare by Request and add a donation to your purchase! 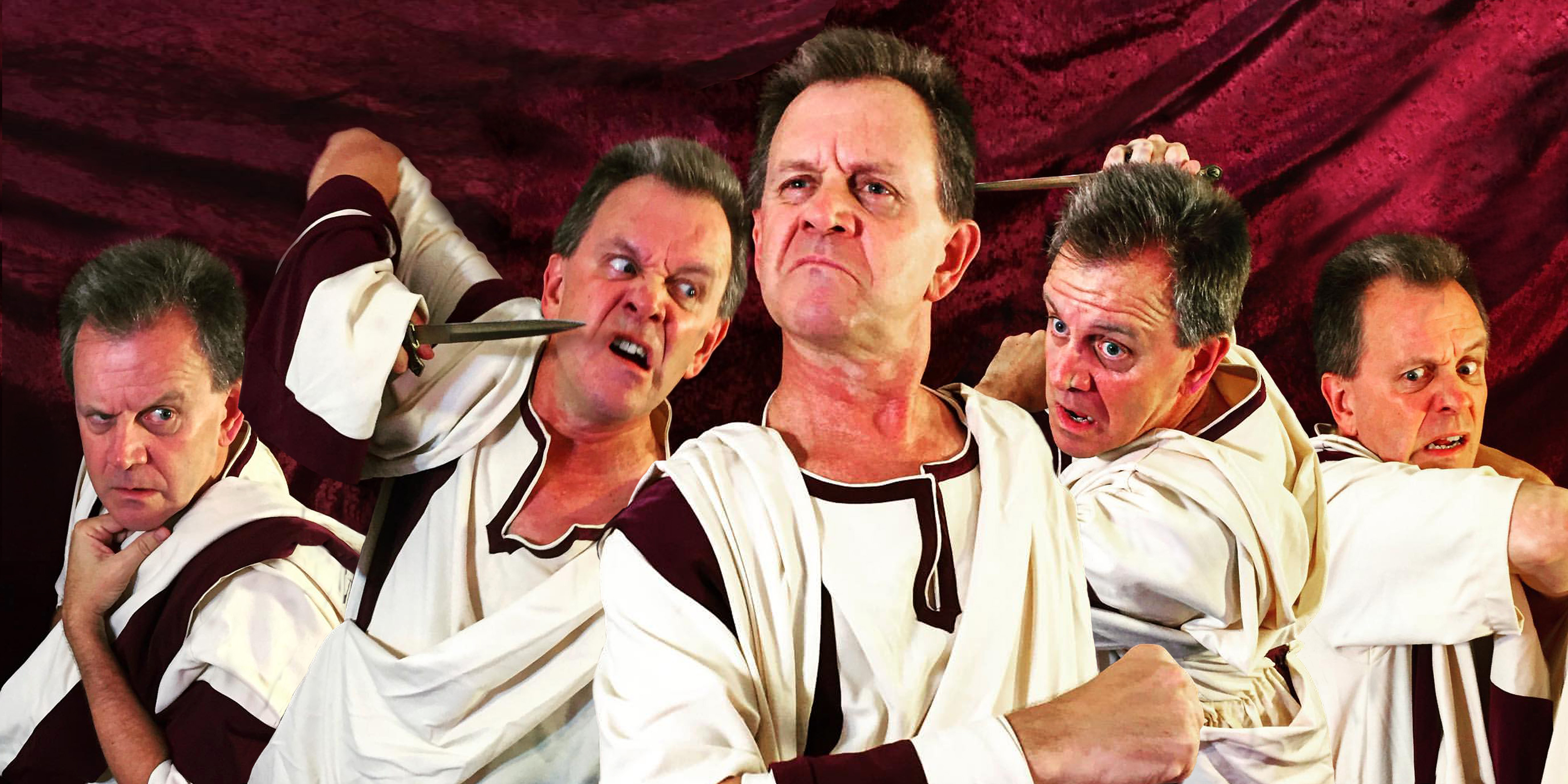 Timothy Mooney is the author/adaptor of “Breakneck Hamlet” and “Shakespeare’s Histories; Ten Epic Plays at a Breakneck Pace!” new one-man plays which “crack the code” on Shakespeare’s most challenging plays, making them accessible to audiences everywhere. Mooney’s acting textbook “Acting at the Speed of Life” is breathing life into stylistic performance at high schools and colleges, while his “The Big Book of Moliere Monologues,” has given actors everywhere a new resource for comic classical auditions. Over fifteen years, Tim has performed his very first one-man play, “Moliere than Thou” over 500 times, giving some hundred thousand students their first introduction to Moliere. He also presents one monologue from every Shakespeare play in his one-man show, “Lot o’ Shakespeare,” along with his collection of some of the most amazing speeches ever, in “The Greatest Speech of All Time.” Mooney is the former founder and editor of “The Script Review” and also the former Artistic Director of Chicago’s Stage Two Theatre, where he produced nearly fifty plays in five years, including many new versions of the plays of Moliere, featuring Mooney’s impish sense of rhyme. These seventeen iambic pentameter variations of the plays (most published by Playscripts, Inc.), have been produced over 150 times, around the world. These productions have gone on to high school competition finals around the U.S., while his “Doctor in Spite of Himself”, took third place in the Scottish Community Drama Association National Festival. Mr. Mooney continues to present six one-man shows across North America, and recently added a new rhymed version of “The Servant of Two Masters” to his catalogue!

We’ve always loved Tim’s shows. From The Greatest Speech of All time to Breakneck Hamlet, we’re usually left with a smile on our faces and new knowledge on the subject matter. We chose to bring you Breakneck Julius Caesar of all his shows, because not only do we super enjoy it, but c’mon… it’s the Ides of March! Of course we had to choose this one!! His depth of knowledge and love for his subject matter is incredibly infectious and you’ll find yourself shouting “Huzzah!” along with us.